If you aren’t Portuguese, you’re probably not familiar with Eça de Queirós, whom some consider to be on the same literary level as Dickens or Balzac. Born in 1845, he is one of the authors young people have to study at school. Some come to love him and others to loathe him, as it’s usually the case with the authors who are required reading. In my case, he became one of my favourite Portuguese authors and one I believe that deserves to be better known.

Eça de Queirós can’t be categorised into one single literary movement. His first works showed characteristics of the Romanticism movement; in a second phase he adhered to Realism / Naturalism; and he was afterwards influenced by Impressionism and Symbolism. My favourite books by him are generally placed in the literary realism movement, and I dare say that this is the phase he’s most known for.

The literary realism movement, which in Portugal appeared around 1865/1870, intends to present reality as it is, describing it in the most objective and detailed way possible. The authors who followed this movement in the mid-19th century intended to portray the vices of society through symbolic characters, whose very existence serves to embody some major idea or aspect of society. And this is one of the reasons why I liked the novels that I read by Eça de Queirós so much.

He was a master at ironically conveying the vices and features of the Portuguese society of his time. The books O Primo Basílio (Cousin Bazilio), O Crime do Padre Amaro (The Crime of Father Amaro) and Os Maias (The Maias) have great examples of social criticism that will probably make you laugh. Moreover, I sometimes wonder if Eça had a TARDIS, as some of the judgments he made on his books via symbolic characters (primarily the ones regarding political aspects) are still quite current.

It was while in England that Eça wrote the majority of his books. He not only worked in the Portuguese Consular Service in Newcastle upon Tyne (1874-1879) and Bristol (1879-1888), but also in Havana (1872) and Paris (1888). Maybe it was the experience of living abroad that provided him the needed distance to analyse so well the Portuguese society.

In Os Maias (The Maias), my favourite of Eça’s books, we are introduced to the Maia family. The novel has two main plots: one focused on the relationship between Pedro da Maia and Maria Monforte; and the other centred around the love story between Carlos da Maia and Maria Eduarda, which is the main plot of the book. The two strands are intertwined, since one explains the other. But this book is much more than a love story. It is also a captivating novel of manners. Readers learn about the way of life in Lisbon in the 19th century, which is associated with idleness, moral decay, adultery, social and political corruption.

My favourite character is João da Ega, a friend of Carlos da Maia. Although he is a romantic at heart, he represents the revolutionary attitudes of the time and is an apologist of realism and naturalism. He is quite a rich character because of all his contradictions.

If you are not that keen on long descriptions, you may find it difficult to go through the first chapter, which is a detailed portrayal of Ramalhete, the house where the Maia family lives. However, the first pages are also full of clues and signs regarding the outcome of the story. Try to endure them and you will discover one of the classics of Portuguese literature.

The second book I read by Eça de Queirós was O Crime do Padre Amaro (The Crime of Father Amaro). Young priest Amaro serves as a diocesan administrator in Leiria, but he lacks a religious vocation. He was persuaded to follow the path of priesthood by his aristocratic patrons, Marquesa de Alegros and Conde de Ribamar. He has a hard time keeping the vow of celibacy and then he meets Amélia… This novel is full of satire and is a criticism of the corruption among the Catholic Church.

The theme of complicated relationships is also present in O Primo Basílio (Cousin Bazilio). In this novel the reader gets to know Luísa, a romantic woman who is married to Jorge, a successful engineer in the employ of the ministry. When her husband has to leave Lisbon and go to Alentejo for work reasons, she struggles with his absence and the lack of things to do. This is when her cousin Basílio, an inveterate womaniser, returns from Brazil and becomes committed to winning Luísa’s affections. The characters in this novel are clear examples of symbolic characters, used to criticise the Lisbon’s bourgeoisie of the 19th century. 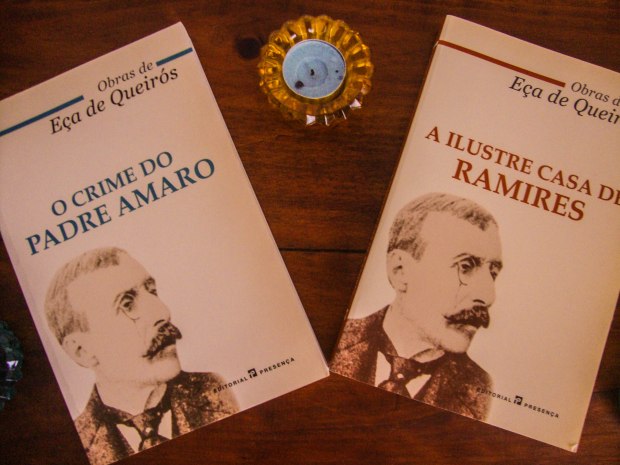 In A Ilustre Casa de Ramires (The Illustrious House of Ramires), we get to know Gonçalo Mendes Ramires, who aims to become a politician. With that in mind, he accepts the proposal of a friend to write a book. He chooses to write a historical novel telling the story of a late family member from the 13th century, Tructesindo Ramires, who was a faithful knight of King Sancho I. Throughout the novel, readers are introduced to two parallel stories. The aim is to convey that being a writer is quite complicated, and Gonçalo Ramires isn’t very good at it!

If you’re a fan of crime stories, O Mistério da Estrada de Sintra (The Mystery of the Sintra Road) may be the appropriate book for you. This is considered to be the first crime story in Portuguese literature and it was written by both Eça de Queirós and Ramalho Ortigão. It was first published in the Diário de Notícias newspaper in 1870 as anonymous letters. The plot focuses on the kidnapping of a doctor and his writer friend, both of whom are then taken to a house where there is a dead man.

Eça de Queirós had a great talent for providing reflections and analyses of human nature. That can be confirmed not only by reading his novels, but also his collection of short stories. If you managed to read this long post until the end, I hope you are now tempted to read one of his books, be it one of those I mentioned or another.

Note: The author’s name is spelled Queirós in modern Portuguese. However, it was spelled Queiroz during his lifetime. Both spellings are currently used in the various editions of his books.