Whenever I think about buying a book by Ian McEwan, I ponder very carefully before finally making a decision, because I’m never quite sure if I’m going to enjoy it or not. I have read a total of seven books by the English author, who was born in 1948. While some I genuinely liked, others I really regretted buying and ended up giving them away.

Ian McEwan has won several awards since he became an author. The first one was the Somerset Maugham Award for the collection of short stories First Love, Last Rites, published in 1975. He also won the Man Booker Prize in 1998 with Amsterdam.

My four favourite books written by Ian McEwan have one thing in common: an important historical or more current event is used as the background for the main plot. This is the case of The Innocent, Atonement, Saturday and Sweet Tooth.

The Innocent takes place in 1955-56 in Berlin at the beginning of the Cold War. Leonard Marnham, a 25-year-old Englishman, is the main character in this novel that revolves around a CIA and MI6 operation whose goal is to build a tunnel from the American to the Russian sector of Berlin, in order to tap the soviet phone lines. Leonard is hired to set up and repair the tape recorders used in the tunnel. While in Berlin, he falls in love with Maria Eckdorf, a 30-year-old divorced German, leading to gory circumstances and Leonard losing his innocence.

Although I really liked The Innocent, my favourite of Ian McEwan’s novels is Atonement. The story starts in 1935 when Briony, a young girl who wants to be a writer, is rehearsing a play. Her misinterpretation of the relationship between her older sister Cecilia and Robbie, who struggle to accept their love for each other, has terrible consequences. She later tries to atone for the result of her actions and make amends. The novel spans various decades and takes the reader on a ride of joy, anger and sadness. During the Second World War section, death, cruelty and despair take over the novel. 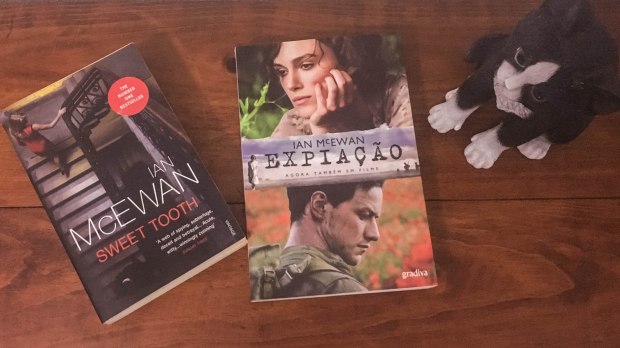 Saturday is set at the beginning of the 21st century and takes place during one single day, although references to past events are made. The demonstration staged in February 2003 against the invasion of Iraq serves as backdrop for a reflection by the main character, Henry Perowne, about personal satisfaction, the meaning of his life, and the protest taking place. The 48-year-old neurosurgeon has a family dinner organised, but it doesn’t end as he planned, mainly because danger doesn’t always come from where we expect it to.

A female character takes centre stage in Sweet Tooth. After graduating from the University of Cambridge in the early 1970s, Serena Frome is recruited by the MI5. She gets involved in a secret program to fight communism through infiltration in the intellectual world. Her assignment is to select young writers with anti-communist views to whom she is to offer financial assistance. However, her personal feelings start colliding with her professional life, influencing the outcome of this spy novel mixed with love story.

The last book I read by Ian McEwan was The Children Act, and I was slightly disappointed. Fiona Maye is a leading High Court Judge who is working on the case of Adam, a 17-year-old boy who is refusing a blood transfusion for religious reasons. The premise is an interesting one, but too many mentions of other cases, which are not directly related to the story, are made, delaying an outcome. 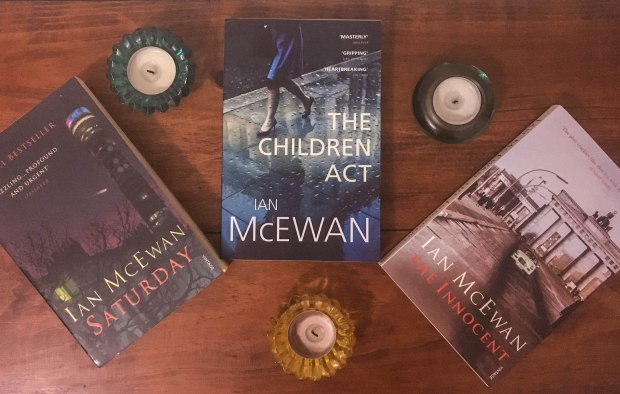 There are two books by Ian McEwan that I didn’t like and that I ended up not keeping on my shelves. On Chesil Beach is one of them. This book really wasn’t for me. It tells the story of a newly married couple, Edward Mayhem and Florence Ponting, who are going through their honeymoon, in 1962, while struggling with different views and sentiments on sex. I just found it really tedious and uninteresting.

If you, like me, don’t like reading about child rape, avoid Ian McEwan’s first collection of short stories First Love, Last Rites like the plague. There are too many weird and unlawful sex encounters in various of the short stories. I really don’t have a problem with sex scenes at all (I really liked that moment in the library between Cecilia and Robbie in Atonement, for example), but some of the occurrences mentioned in these short stories are a bit too shocking and with not many feelings involved.

Although I didn’t like all of Ian McEwan’s books that I’ve read, I want to continue to delve into his work. In the future, I plan to read Amsterdam, Black Dogs, Nutshell, The Cement Garden and The Child in Time. Hopefully they will be new additions to my favourite books by Ian McEwan.

3 thoughts on “Ian McEwan: A Problem of Unpredictability”