Jane Austen needs no introduction. Even if you have never read one of her books, you surely have heard her name mentioned a million times. I first became aware of her work when I watched the 2005 film adaptation of Pride and Prejudice and immediately decided to read the book. I know this is an unconventional opinion, but I really loved the film by Joe Wright, who is one of my favourite directors, and I still picture Mr Darcy as Matthew Macfadyen.

If someone had just randomly and briefly told me about the plot of any of Jane Austen’s novels, I would probably have thought that I wouldn’t enjoy them, since they would have seemed to be just about simple love stories with nothing exciting to offer. However, that would have been a wrong assessment, because, most of all, they are novels of manners which depict the middle-class life during the early 19th century. I love the wit of the writing style, the way in which the characters are portrayed with distinguishable personalities, and the irony used to subtly criticise some of their actions. They offer so much more than just stories about love and relationships at a time when marriage was seen as a means to achieve security in life.

After reading all of the six major novels by Jane Austen, who was born in 1775 and died in 1817, Pride and Prejudice remains my favourite. It tells the story of the Bennet family. Mrs Bennet is anxious to marry her five daughters. The second eldest, Elizabeth, is the heroine of the novel. She is intelligent, playful and witty, but assesses people after first impressions. Mr Darcy is one of the people she makes fast judgements about. But he is not innocent in the misunderstandings that arise between them. He struggles to overcome his pride and to give less importance to social status. I loved the development of their relationship and the well-conceived characters who enrich the satire present throughout the novel.

Some time passed before I read another of Jane Austen’s novels. But then I read two in a short period of time: Sense and Sensibility and Persuasion. The first delves into the differences between the Dashwood sisters, Elinor and Marianne, who represent good sense and emotion, respectively. They become destitute when their father dies and their home passes to his stepbrother, John. The family is then forced to move to a modest house in Devonshire. Marianne becomes infatuated with John Willoughby, who pretends to be someone he is not, while Elinor remains constant in her love for Edward Ferrars. Austen achieves a really good characterisation of two different sisters.

Persuasion, on the other hand, is a subdued satire focusing on the love story between Anne Elliot and Captain Frederick Wentworth. Anne was persuaded not to marry him, because he was not deemed eligible as a suitor. But everything changes when he returns from the Napoleonic Wars eight years after. 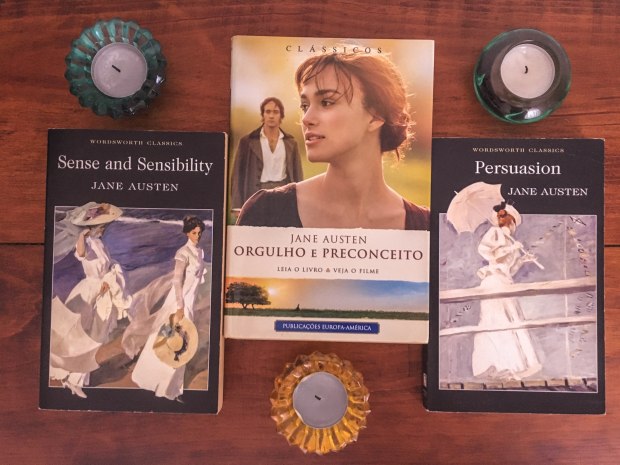 If you are a reader looking for amusement, Emma may be the book for you. Emma Woodhouse is wealthy and pretty. Her favourite pastime is to be a matchmaker among her friends and neighbours. But, to her great astonishment, people not always act as she expects them to.

Catherine Morland, the heroine of Northanger Abbey, has other interests. She loves reading gothic novels and has a very active imagination. While she is staying in Bath with her wealthy neighbours, the Allens, she becomes acquainted with Isabella, Mr Thorpe, Eleanor and Henry Tilney. The Tilneys invite her to spend some time at Northanger Abbey and she gladly accepts. When she gets there, her imagination is propelled, as she expects to solve non-existent hidden mysteries. Henry Tilney is my favourite character in this novel. He is so cleverly sarcastic and amusing that I would like to read a book with him as the main character.

The last book I read by Jane Austen was Mansfield Park. The novel starts when Fanny Price is still quite young. She is chosen from amongst her siblings to go live with her aunt and uncle at Mansfield Park. She is to remember that she is not an equal to her cousins, though, and Mrs Norris always makes sure of that. At first, Fanny feels like an observer of the other characters’ lives, but she ends up taking centre stage. Although I quite enjoyed it, this is probably my least favourite of Jane Austen’s novels, possibly because Fanny is so reserved and quiet.

If you’ve never read a novel by Jane Austen and are wondering where to start, I wouldn’t recommend Mansfield Park. Pride and Prejudice, Emma or Northanger Abbey, in case you prefer something shorter, are all better options. Whichever you choose, make sure you read at least one of her books. I still want to read Lady Susan and The Beautiful Cassandra, and reread Pride and Prejudice, but this time in the original in English, as the first time I read the Portuguese translation.

3 thoughts on “Jane Austen: A Love Story with The Novel of Manners”