I managed to wait until February to buy books for the first time in 2019! It was really difficult to resist the urge to get new books until the second month of the year, although I still had a few unread ones on my shelves. I bought a total of eight books, unintentionally almost all of them were written by women.

Soon after getting married, Elsie became a widow. She has no friends amongst the servants nor the villagers. Her only company seems to be her late husband’s awkward cousin, until she finds a locked room where there is a wooden figure which strongly resembles herself. I am eager to be frightened by this book!

The Mermaid and Mrs Hancock by Imogen Hermes Gowar

This historical novel immediately caught my interest at the time of its release last year, but I decided to wait for the paperback edition. I started reading it soon after it was delivered and am now more than halfway through. Although I am enjoying discovering more about the characters, I was expecting more in terms of plot. One of Jonah Hancock’s captains sells his ship in exchange for what appears to be a mermaid. At first, he is appalled by the loss of his ship. However, his captain convinces him that by exhibiting the mermaid he can make a big profit. It’s thanks to his mermaid that he meets the beautiful courtesan Angelica. 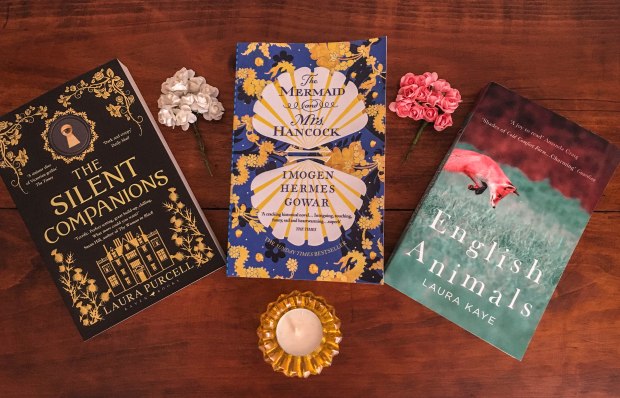 Mirka, who is originally from Slovakia, gets a job in a country house in rural England. Her employers, Richard and Sophia, can be equally offensive and generous. She learns to be happy at her new home, until new problems arise. This is generally regarded as a great book by many people. I’m not sure what to expect to be honest, despite being eager to read it.

Nights at the Circus by Angela Carter

I’ve been meaning to read a book by Angela Carter for a long time. Nights at the Circus has as main character Sophie Fevvers, a part woman part swan star at the Colonel Kearney’s circus. An American journalist wants the scoop of a lifetime, so tries to discover her true identity.

The Penelopiad by Margaret Atwood

Margaret Atwood is one of the authors who I want to read a book by every year. My choice this time has fallen upon The Penelopiad, a Greek myth retelling. It is “a tale of lust, greed and murder”, which I believe reveals Penelope’s perspective about the wait for her husband.

The Seven Deaths of Evelyn Hardcastle by Stuart Turton

Evelyn Hardcastle will die and not only once. Her murder will repeat itself until Aiden, one of the guests at the party, can discover who is responsible. This novel deserved a place amongst many people’s favourite books from last year, thus I’m both excited and nervous to finally read it. Will I also love it?

Life After Life by Kate Atkinson

I’ve been meaning to read Life After Life since exceedingly liking A God in Ruins. If in the second we follow the life of Teddy Tod, in the first it’s his sister who takes centre stage. Ursula Todd will live many times, dying and being reborn again. I’m ready for Kate Atkinson to break my heart again.

The Wicked Cometh by Laura Carlin

Set in London in 1831, The Wicked Cometh caught my attention because of the cover to be truly honest. But the story also appealed to me. Hester White is eager to achieve a better life. Her casual encounter with the aristocratic Brock family provides her with the perfect opportunity to get what she wants. The problem is her past.

Have you read and enjoyed any of these books? Tell me in the comments!