2022 was the first year I took part in 20 Books of Summer hosted by Cathy of the blog 746 Books. The challenge is simple, albeit not necessarily easy to achieve – read 20 books during the three summer months (it’s also possible to read only 10 or 15). As in a way I was already expecting to happen, I didn’t manage to read the 20 books I had selected at the end of May. I only read in their entirety eleven books, decided not to finish three and am still currently reading one (Human Acts by Han Kang).

Although this challenge allowed me to finally pick up books that had been on my wish list for a long time, I don’t think I’ll participate again next year, since it was far more taxing than I had anticipated. I thought that having a set number of books to read within a short space of time wouldn’t be a weighty pressure, but it ended up feeling like it. I usually only read one to three books a month (depending on the size), so I found it stressful to have to push myself to read more than usual. Well, I didn’t have to… but, particularly in July, I tried really hard to. Having only picked up short books also rendered the reading experience in a way monotonous.

Below is the list of books that I had set for the challenge, featuring links to the reviews of those I read and mentioning the ones that I DNFed.

As Mãos Pequenas (Such Small Hands) by Andrés Barba

Strike Your Heart by Amélie Nothomb

The Cement Garden by Ian McEwan

The Garden Party by Katherine Mansfield

The Magic Toyshop by Angela Carter 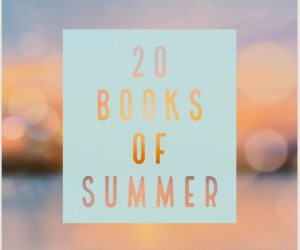 Despite all the stress, three books stood out the most from the eleven that I read in full. My favourite of all is Strike Your Heart by Amélie Nothomb, a gripping and insightful novella about uncaring and jealous mothers told mostly from the perspective of a perceptive daughter, Diane. When she was born, her mother, Marie, became immediately jealous of her. Diane soon concluded that Marie didn’t love her much, which influenced her decisions and outlook on life. The writing style is one of the highlights of the book, which is full of meaningful and magical moments. The characterisation of Diane is a great success too.

The Magic Toyshop by Angela Carter is another book I cherished reading. It is a coming-of-age novel, exploring the sexual awakening of a young woman, that shows influences of Victorian novels and Ancient Greek myths. When Melanie lost her parents, she and her two siblings had to go live with their mother’s brother, uncle Philip, who is a toymaker in London. He is an old-fashioned brute who scares everyone around him. The suggestive metaphors and similes are a huge plus.

Finally, other book I have to highlight is Mrs Dalloway by Virginia Woolf. Told in a stream-of-consciousness style, it follows a group of characters and their tours around London, creating an authentic sense of time and painting an impressive picture of the socio-economic conditions of its inhabitants. Clarissa Dalloway, who is getting ready to host a party, is just one of the various characters in the book. Her husband, her daughter, Peter Walsh and Septimus Warren Smith are also extremely relevant.

Have you taken part in 20 Books of Summer this year? How did you do? Tell me in the comments!