December is inescapably the month of Christmas celebrations, and my favourites reflect that to an extent. Not only have I read six books (the biggest number in a month last year), two of them revolving around Christmas, but I’ve also listened to some unusual music to me, eaten too many sweets and got some new clothing items.

My favourite book from the ones I read last month is Christmas Days: 12 Stories and 12 Feasts for 12 Days by Jeanette Winterson. It’s a collection of short stories accompanied by recipes related to Christmas and New Year’s Eve. It features many magical and supernatural elements. Some stories stand out because they are extremely atmospheric. Others have incredibly fleshed out characters. I didn’t like all stories equally, but a few were highly gripping. I’ll post a more detailed review soon.

Music-wise, during the first half of last month there was a song I kept listening to over and over again – ‘Santa’s Coming for Us’ by Sia. I don’t tend to like Christmas songs, so the fact that I enjoy this song so much is surprising even for me. My excitement for Christmas diminished as the date approached, but I still listened to this song (which I discovered for the first time in 2017) a few times after that happened.

I don’t remember watching much TV in December… Nevertheless, I do have a favourite, although it is not something that I watched for the first time. Last month, I started re-watching Game of Thrones in preparation for the new and final season, which premieres in April. I watched the first season in its entirety and the first eight episodes of the second season and loved them as much as the first time. It was still engrossing, despite knowing everything that was going to happen, and it’s great to be able to pay more attention to the clues left since the beginning to some of the revelations later on.

Finally, my favourite Christmas present was a navy winter coat my mother made for me. It’s nice and warm, and the slightly puffy shoulders have been a huge success. 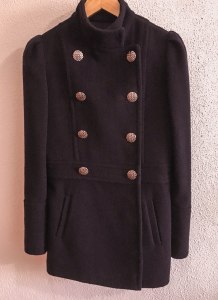 These are my favourites from December! What are yours? Tell me in the comments!