During strange times, there’s something calming about reading a book and get immersed in a fictional world, reason why I had to buy some books! This haul features classics, fantasy and historical fiction. I’ve already finished one of the books, and the others I expect to read soon.

Pride and Prejudice by Jane Austen

I read Pride and Prejudice for the first time more than ten years ago. It was the first book that I read by Jane Austen. Having now read all of her major novels once, I decided to reread it, but this time in English, as I had previously read the Portuguese translation. So, I bought a beautiful Vintage Classics edition.

In the second book in The Farseer trilogy, Robin Hobb continues to tell the story of Fitz, as he faces grave danger and is asked to make sacrifices for the good of the realm. I expect this instalment to continue to explore human emotions and to also be full of court intrigue.

The Scapegoat by Daphne du Maurier

Daphne du Maurier is an author whom I’m trying to read at least one book by every year. The Scapegoat is about two men, an English and a French, who meet at a railway station. They look very much alike. After spending some hours talking and drinking together, Jean steals John identity. I’m intrigued! 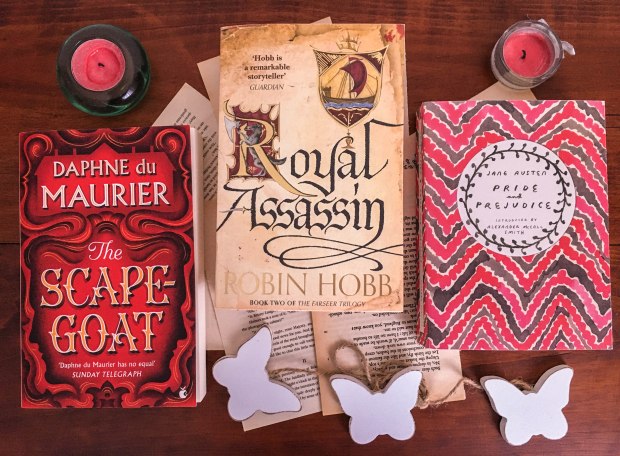 Set in Lisbon in 1938, this novel explores the relationship between Pereira, an old journalist, the young Monteiro Rossi and Marta. This will be my first time reading a book by the Italian author Antonio Tabucchi, thus I’m both curious and unsure about what to expect.

Thomas Gradgrind raises his children to only be interested in facts. Creativity and imagination are completely out of the question. Not having a moral compass will cause them problems in the future, though. What kind of difficulties? I’ll have to read this novel to find out.

The Doll Factory by Elizabeth Macneal

Although I’ve only recently bought this book, I’ve already read it. I liked it immensely! The main character, Iris, desires to become a painter, but society and her family see her aspiration as immoral. She is intent on pursuing her dream, though. Along the way she meets Silas and Louis, and both change her life in different ways. I’ll write a review about it soon.

Have you read any of these books? Tell me in the comments!

Welcome to “A Bag Full of Stories”!
On this little corner of the Internet, I share my love for stories, books and reading. Currently, there is new bookish content (almost) every Wednesday!